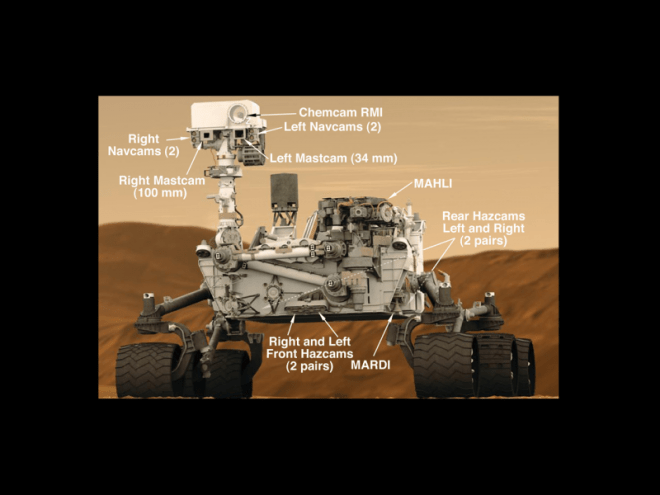 This graphic shows the locations of the cameras on NASA’s Curiosity rover. The rover’s mast features seven cameras: the Remote Micro Imager, part of the Chemistry and Camera suite; four black-and-white Navigation Cameras (two on the left and two on the right) and two color Mast Cameras (Mastcams). The left Mastcam has a 34-millimeter lens and the right Mastcam has a 100-millimeter lens.

There is one camera on the end of a robotic arm that is stowed in this graphic; it is called the Mars Hand Lens Imager (MAHLI).

There are nine cameras hard-mounted to the rover: two pairs of black-and-white Hazard Avoidance Cameras in the front, another two pair mounted to the rear of the rover, (dashed arrows in the graphic) and the color Mars Descent Imager (MARDI).

From where do these sensors come? And what are they all for?

END_OF_DOCUMENT_TOKEN_TO_BE_REPLACED

The highest-resolution panorama ever taken by a rover illuminates unprecedented detail of the red planet’s surface.

“Studying whether there’s life on Mars or studying how the universe began, there’s something magical about pushing back the frontiers of knowledge. That’s something that is almost part of being human, and I’m certain that will continue.” –Sally Ride

What are Tin Whiskers?

Tin whiskers are electrically conductive, crystalline structures of tin that sometimes grow from surfaces where tin (especially electroplated tin) is used as a final finish.  Tin whiskers have been observed to grow to lengths of several millimeters (mm) and in rare instances to lengths in excess of 10 mm.  Numerous electronic system failures have been attributed to short circuits caused by tin whiskers that bridge closely-spaced circuit elements maintained at different electrical potentials.

Tin whiskers are not a new phenomenon.  Indeed, the first published reports of tin whiskers date back to the 1940s and 1950s. Tin is only one of several metals that is known to be capable of growing whiskers.  Other examples of metals that may form whiskers include some tin alloys, zinc, cadmium, indium, antimony, silver among others .

People sometimes confuse the term “whiskers” with a more familiar phenomenon known as “dendrites” commonly formed by electrochemical migration processes.  Therefore, it is important to note here that whiskers and dendrites are two very different phenomena. A “Whisker” generally has the shape of a very thin, single filament or hair-like protrusion that emerges outward (z-axis) from a surface.  “Dendrites”, on the other hand, form in fern-like or snowflake-like patterns growing along a surface (x-y plane) rather than outward from it.  The growth mechanism for dendrites is well-understood and requires some type of moisture capable of dissolving the metal (e.g., tin) into a solution of metal ions which are then redistributed by electromigration in the presence of an electromagnetic field.  While the precise mechanism for whisker formation remains unknown, it is known that whisker formation does NOT require either dissolution of the metal NOR the presence of electromagnetic field